Victory of the Hawk, by Angela Highland 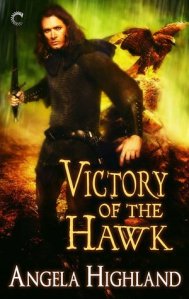 Description: As war rages across Adalonia, their only hope is a sword named Moonshadow, the weapon that first saved the elves from the Anreulag.

Julian yearns to confess his love to Faanshi, the elven healer who captivated him since their first chance encounter. Though he fears she and Kestar share a deep connection, he must thrust such worry aside as danger descends upon them and their uneasy elven allies…

Faanshi’s connection to Kestar is inexplicable, born of her magic and their shared elven blood. She knows his every thought and desire, but her heart lies with Julian. She’ll have to find a way to tell him soon, even in the midst of rebellion…

Though he knows not why—only that it involves his own recently discovered elven heritage—Kestar has risked the lives of everyone around him. For the Anreulag, the Voice of the Gods, has been freed of Her magical prison and will kill all in Her path until he is found.

This book was given by NetGalley in exchange for an honest review.

I wish I’d known that this was the last in a trilogy before reading it, as it was a great read, and I’m now going to have to scout out the first two so I can read the beginning of the tale so I know what is happening to make the characters act like they did.

That being said, I’m sure that is the reason I was confused at the start, because it launched straight into the action with no explanation or backstory. Despite that, it is a very well written book, and the characters were easy to get to know once I worked out some of their backstory. They all have depth, and even with the little I knew of them, I gleaned enough to understand how they’d come to know each other, and the varying feelings they had for each other.

As a reader who hasn’t read the first two books, I found that the worldbuilding was limited, but still gave me an understanding of how the religions and different races worked. I’m sure that when I read the first two, that opinion will change as most of it will have been done already. The one thing that struck me as very odd (before finding out that it wasn’t, as I’d though, a standalone) was the lack of introducing the characters. They were simply plunged into the plot — which admittedly all makes sense now. Still, I can’t wait to find out what they’re described as, since I only know them by their actions, and tiny hints like eyes colour and race.

All in all, Victory of the Hawk was a very enjoyable read, and I will be actively searching for copies of all three to take a place in my bookshelf.